While media personality, Toke Makinwa, might be happy with the results from her Brazilian Bu*t Lift (BBL) surgery, some people still find her and other celebrities who have gone under the knife to enhance their body features to be going against certain moral standards and religious commandments.

Recently, Nigerian actor, Richard Mofe Damijo criticised women who are going under the knife to alter their body. He stated that a woman who is truly secure would not go under the knife just to get validation from others.

While some agree with him, Toke Makinwa seems to be unhappy about his stance.

Although, she didn’t outrightly speak against him, Makinwa appeared to be throwing shades when she insinuated that it is no one’s business what people choose to do with their bodies.

In her post, she adviced that people should judge less and mind their business. 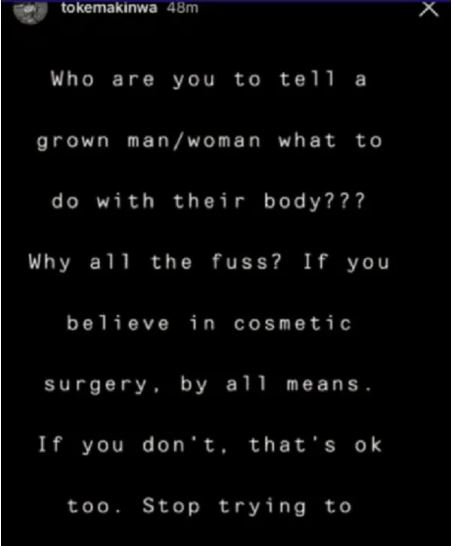 Do You Agree?? Northerners Are One Of The Major Problems In Nigeria – Emir Sanusi

BREAKING: EFCC Releases Shehu Sani After Being Detained For 4 Weeks

DIABETICS: Nine things to do to avoid disease

Do You Agree?? Northerners Are One Of The Major Problems In...

Police arrest Small Doctor 3 others arrested for alleged possession of...